A Voice for Religious Freedom 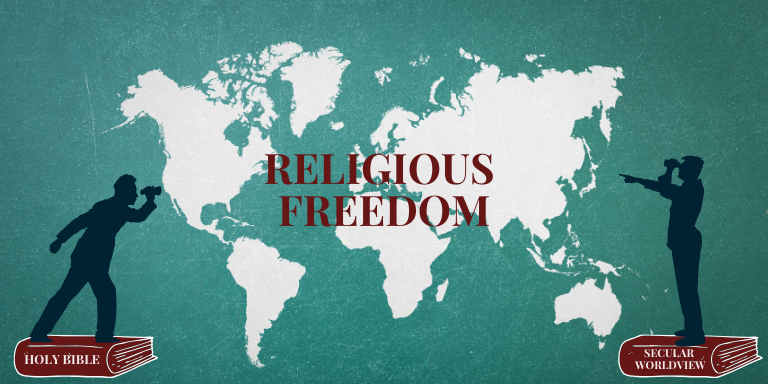 The principles of religious freedom are hotly debated in the public square and the conversation is currently centered upon worldview.  And those worldviews cannot be farther apart. One values the fundamental right to live and work according to one’s deeply held religious beliefs, and the other demands conformity to the ever-changing sexual ethic.

Speaking of the recent “Equity Town Hall” and “the massive revolution in morality, especially on matters of marriage and sexuality and gender,” Albert Mohler proposed that “virtually every one of the candidates there on stage sa[id] you don’t deserve to have any voice in this society [and] we will use the coercive power of the government to silence” contrary viewpoints. Also at the Town Hall:

This secular worldview is “effectively ready to deny rights of conscience to Christians, to Christian business people, and even to Christian institutions and schools, and all of that is simply packaged in a very friendly approach which smiles all the way to taking away your religious liberty,” according to Albert Mohler.

Engage Arizona podcast spoke with Emilie Kao of the Heritage Foundation about the Extreme Consequences of the Equality Act. Emilie shared that “nondiscrimination” provisions at the state level have been used to embolden lawsuits against Catholic hospitals that decline to perform procedures on healthy patients.  In one instance, a hospital was sued for declining to perform a hysterectomy on a perfectly healthy woman – because by policy the hospital does not perform any sterilization procedure for any patient unless there is a threat to life or health of the patient. But state law allowed the suit under a claim of discrimination, despite religious protections, because the transgender woman now insisted on removal of the reproductive organs.  A suit might similarly be brought by a hospital for declining to perform an elective mastectomy on a patient.

Congresswoman Debbie Lesko of Arizona explains the core problems with the Equality Act in a video featured in the Daily Signal. Representative Lesko says the act would eliminate the women’s rights that we have fought for over many years.

So what is the Biblical perspective?  Sam Allberry, apologist and author of “7 Myths about Singleness,” “Is God Anti-Gay?” and “Why Should God Care Who I Sleep With?” (March 2020), provided a Biblical perspective in an Engage Arizona podcast. Sam reminded that we all have fears and difficulties, whether single or married, and we have a responsibility to understand and support one-another.  Yet, these deeper longings of our heart and romantic fulfillment are meant as signposts towards the ultimate marriage – Christ and the Church. Further, the ultimate purpose of our sexuality is to point us to Christ and the fulfillment we have in Him.

For additional information on these and other topics, visit Engage Arizona Podcasts.