The Equality Act: What You Need to Know

“The Equality Act” sounds like a great bill. Who would be against equality? But, it’s not really about equality.

The Equality Act is really about using the full weight of the federal government to impose the ever-evolving sexual revolution on the American people, under threat of punishment or loss of federal funds.

Rather than allow a national debate on the issues of human sexuality and gender, the Act shuts down the debate and, in essence, labels as bigots those who will not bow the knee to the sexual revolution.

As Andrew Walker writes, “For progressives, the Equality Act is the rallying cry that would forever cement the legitimacy of sexual-revolution ethics into federal law.”

So What is the Equality Act?

The Equality Act— to be introduced by House Democrats in Congress—adds “sexual orientation” and “gender identity” to the list of protected classes under the 1964 Civil Rights Act.  This means that almost no area of American public life—including education, employment, public accommodation, housing, medical care, non-profits, and federal funding for example—will be left untouched. 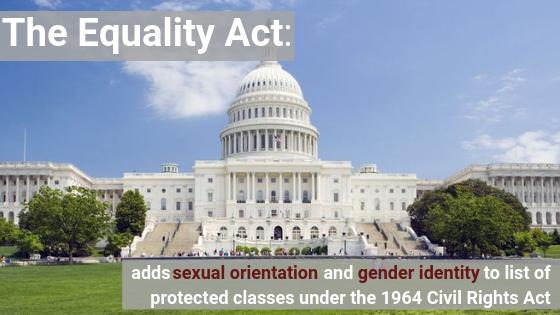 Obviously, invidious discrimination is wrong, but that is not what the Equality Act is addressing. Americans are not being denied employment, housing, or public accommodations because of their sexual orientation or gender identity.

Rather, these types of laws have been used throughout the country to punish those that believe that marriage is only between one man and one woman, and believe that there are only two genders, male and female, both rooted in biology.

Some Problems with the Equality Act:

1. It threatens the fundamental freedoms of speech and religion

2. It threatens privacy, safety, and opportunities for women and girls

3. It would undermine parental rights

4. It would codify transgender ideology into federal law

Although proponents of the Equality Act are trumpeting equality as their cause, the effects of the bill would be devastating to American society.

As Ryan T. Anderson eloquently states, “Instead of treating disagreement as if it were discrimination, Americans of all walks of life must strive to peacefully coexist even when we don’t see eye to eye.”

Human sexuality and gender are best left open as matters of national debate. The federal government should stay out of the business of imposing a newly imagined and ever-evolving sexual ethic on the entire nation.

For more analysis on the Equality Act, see: