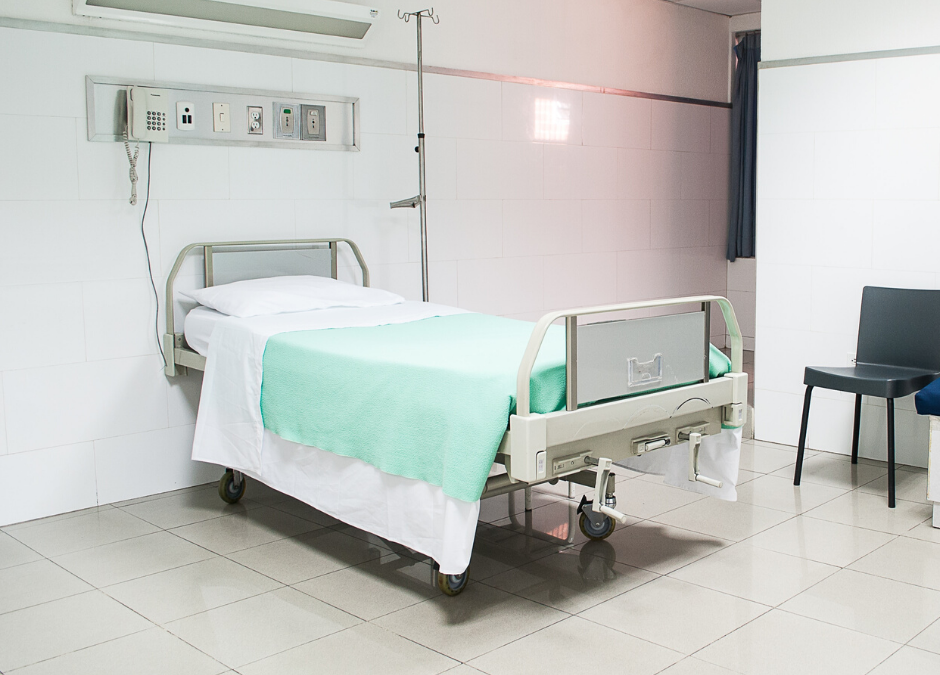 Physician-assisted suicide (PAS) laws— more accurately called doctor-prescribed death—permit a physician to prescribe a lethal dose of medication to adult patients deemed competent and terminally ill. These so-called “Aid-in-Dying” or “Death with Dignity” laws devalue human life, turn medical care upside down, are ripe for abuse, and endanger the weak and vulnerable. As of 2019, nine states and the District of Columbia have legalized PAS.

Legislation designed to permit doctor-prescribed deaths has been introduced repeatedly in the Arizona legislature over the past decade. Center for Arizona Policy (CAP) is committed to opposing any such effort because affirming the worth and dignity of human life requires its protection from its very beginning to its natural end. In 2014, CAP-supported HB 2565 was signed into law, clarifying physician-assisted suicide is illegal in Arizona.

Doctors should care and heal, not kill. Proponents of PAS legislation contend doctors should be allowed to prescribe lethal medication to terminally ill patients if their pain becomes unbearable. However, as Ryan T. Anderson from the Heritage Foundation rightly argues, “[d]octors should help their patients to die a dignified death of natural causes, not assist in killing. Physicians are always to care, never to kill.”[1]

For those in physical pain, doctors can provide palliative medicine to manage effectively the pain. For those for whom death is imminent, hospice care and the companionship of family and friends allow the person to die a dignified death of natural causes. To be sure, affirming the worth and dignity of human life does not require extending life by every possible medical treatment, yet allowing the doctor to hasten a person’s death through lethal medication is altogether different. Legalizing doctor-prescribed death is not the solution.

Physician-assisted Suicide in the U.S.

PAS laws varies in each state, but generally allows terminally ill patients (18 years of age or older and residents of the state) to end their life through a voluntary, self-administered, lethal dose of medication prescribed by a physician. Terminally ill is typically defined as an incurable and irreversible disease that has been medically confirmed and will, within reasonable medical judgment, result in death within 6 months. 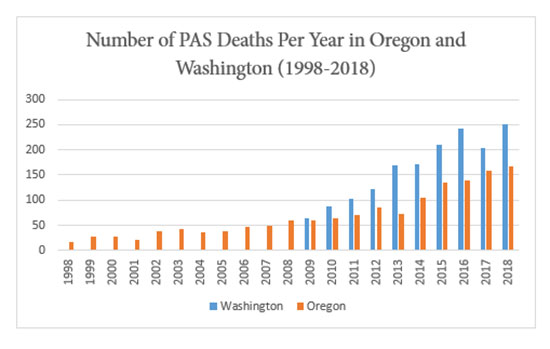 In 2014, CAP-supported HB 2565 was signed into law, clarifying physician-assisted suicide is illegal in Arizona. The law reads, “A person commits manslaughter by . . . . 3. Intentionally providing the physical means that another person uses to commit suicide, with the knowledge that the person intends to commit suicide;” (A.R.S. §13-1103(A)(3)).

Over time, PAS statutes create a society where it is believed that some lives are just not worth living. For example, since Oregon’s PAS law became effective, the number of people that have used the law to take their lives has steadily grown: 16 in 1998 to 60 in 2008 to 168 in 2018. More troubling yet, the total number of deaths from 1998 to 2008 was around 400, while the number of deaths from 2009 to 2018 over 1,000.[4] A rapidly growing number of Oregonians are deciding that life is no longer worth living when they lose autonomy and their quality of life is not what they want it to be.

The societal devaluing of human life is most evident in the Netherlands and Belgium, where PAS and euthanasia (where the physician acts directly to end the patient’s life) have been legal since the early 2000s. For example, the reported cases of euthanasia in the Netherlands have skyrocketed from 1,882 in 2002 to 6,091 in 2016, even though the population in the Netherlands only grew by 4% during that time.[5] The rise in Belgium has been even more drastic: 349 in 2004 to 953 in 2010 and doubling in six years to 2,022 in 2016.[6]

Moreover, these countries have extended the availability of euthanasia beyond terminal illnesses and even to children— 12 years of age in the Netherlands and no age restriction in Belgium.[7] These changes have authorized the euthanasia of adults with blindness, chronic anorexia, tinnitus (loud ringing in the ears), molysomophia (fear of dirt or contamination), mental illness, and dementia (if requested when lucid),[8] as well as a nine-year-old with a brain tumor and an eleven-year-old with cystic fibrosis.[9]

Medical professionals in the U.S. that oppose PAS do so, in part, because they believe with PAS legalization “boundaries will be eroded and practice will extend beyond competent, terminally ill adult patients. . . to patients with psychiatric disorders, [and] children; or that criteria will be broadened beyond physical suffering to encompass existential suffering,”[10] as has been the case in the Netherlands and Belgium.

Rather than provide “dignity-in-dying,” PAS laws undermine human dignity at the societal level because the justifications of autonomy and pain logically lead to an ever-expanding list of lives believed not worth living.

Oregon Health Authority’s “Death with Dignity Act” 2018 report shows that unbearable pain is not the reason terminally ill individuals have requested lethal medication. Of the 1,459 individuals that have committed suicide by taking prescribed lethal medication since the law took effect in 1998, 90.6% cited “losing autonomy,” 89.1% cited “less able to engage in activities making life enjoyable,” 74.4% cited “loss of dignity,” 44.3% cited “losing control of bodily functions,” and 44.8% cited “burden on family, friends/caregivers” as their end of life concerns. Only 25.7% cited “inadequate pain control or concern about it.” Pain, though a concern for some, is not the reason why people are choosing to end their lives.

PAS corrupts the medical profession because it contradicts the purpose of medicine, which is to heal, eliminate disease, and alleviate pain.[11] In the summer of 2019, the American Medical Association (AMA) with a 71% vote reaffirmed its opposition to physician-assisted suicide, in part because PAS “is fundamentally incompatible with the physician’s role as healer.”[12] As the AMA’s Council on Ethical and Judicial Affairs notes in a recent report on the issue, many in the medical profession believe PAS “will compromise the integrity of the [medical] profession, undermine trust, and harm the physicians and other health care professionals who participate.”

The same report also notes that many in the medical community fear “forces outside medicine will unduly influence decisions” if PAS is an option. For example, it may create “perverse incentives for insurance providers and the financing of health care” because PAS will often be a more cost-effective measure than further treatment. [13]

PAS statutes supposedly have safeguards to protect the vulnerable, but they have proved illusory. Although studies suggest those wanting to end their lives under PAS laws struggle with depression and hopelessness, only three out of the 249 people who received lethal medication under Oregon’s PAS law in 2018 had been given a psychological or psychiatric evaluation.[14]

Also, the Oregon PAS law requires the patient to make a written request with two witnesses, one of which is not a relative, meaning it would allow for a family member (who may gain from the death) and one of the family member’s friends to be witnesses. It also allows for patients or “more powerful guardians [to] shop around for a doctor” who would be sympathetic to PAS.[15]

Moreover, according to the Oregon Health Authority’s 2018 report, doctors or other medical providers were known to be present during the ingestion of the prescribed lethal drug in only  65 out of 168 cases. Meaning that in over one hundred deaths, the Health Authority does not know the circumstances under which the patient ingested the lethal medication. The presence of pressure or coercion is simply unknown.

With the increasing cost of health care for the elderly and extremely ill patients, there may be pressure on them to take their lives to alleviate the burden on their families. They may sense a “duty to die.” “[S]ocioeconomically disadvantaged patients” would be at even greater risk of being “coerced or encouraged to end their lives.”[16]

Although families have a responsibility for disabled and elderly relatives, the option of PAS creates a temptation to view them as burdens. According to Oregon Health Authority’s “Death with Dignity Act” 2018 report, 54.2% of those who were assisted with suicide cited burden on family, friends or caregivers as one of the reasons for seeking to end their lives.[17] In the Netherlands, a study of Dutch hospitals found that more requests for euthanasia actually come from families than from patients themselves.[18] The rise of euthanasia in the Netherlands has caused great fear among Dutch seniors, leading many to carry “anti-euthanasia cards” so that treating physicians know they want to live.[19]

In addition, the logic of PAS – it is compassionate to help some patients end their lives – easily expands to include those too disabled to kill themselves, and even those too disabled to request an end to their perceived suffering, like infants or the demented. Why should the “compassionate act” be limited to those healthy enough to request and self-administer the lethal drugs? This reasoning has taken root in the Netherlands, where “several official, government-sponsored surveys have disclosed both that in thousands of cases, doctors have intentionally administered lethal injections to patients without a request and that in thousands of cases, they have failed to report cases to the authorities,”[20] including cases of newborns diagnosed with spina bifida and trisomy 13.[21]

Doctors should care and heal, not kill. Euphemistically called “Aid-in-Dying” or “Death with Dignity” legislation, physician-assisted suicide laws devalue human life, turn medical care upside down, are ripe for abuse, and endanger the weak and vulnerable. The disastrous effects of these laws are plain to see in the Netherlands and Belgium. Palliative medicine is available to manage effectively the pain, and for those whom death is imminent, hospice care and the companionship of family and friends allows the person to die a dignified death of natural causes.