What Haunts our Country

“Roe versus Wade and Planned Parenthood versus Casey haunt our country. They have no basis in the Constitution. They have no home in our history or traditions. They’ve damaged the democratic process. They’ve poisoned the law. They’ve choked off compromise. For 50 years, they’ve kept this Court at the center of a political battle that it can never resolve. And 50 years on, they stand alone. Nowhere else does this Court recognize a right to end a human life.”

A term used by U.S. Supreme Court Justice Samuel Alito to describe past decisions to legalize slavery and to legalize abortion

The day we have been waiting for did not disappoint.  The U.S. Supreme Court’s oral arguments in Dobbs v. Jackson Women’s Health Organization went very well for those on the side of life. The case challenges a Mississippi law limiting abortions to 15-weeks gestational age of the unborn child. The case directly challenges the prior court decisions of Roe and Casey that legalized abortion and prevented states from regulating abortions before the unborn child was viable, meaning able to live outside the womb.

The independent SCOTUS Blog summed it up this way: “Thomas and the other members of the court’s six justice conservative majority seemed poised to uphold a Mississippi law that bans almost all abortions after the 15th week of pregnancy. That decision would further curtail the right to abortion and undermine a key component of Roe.”

Ed Whelan of the Ethics and Public Policy Center noted that nothing from the five conservative justices (Clarence Thomas, Samuel Alito, John Kavanaugh, Neil Gorsuch, and Amy Coney Barrett) raised any concerns. In fact, those justices raised question that give hope that the Mississippi law will be overturned with the possibility strong that the Court will overrule Roe and Casey.

Even Chief Justice Roberts noted the fact the United States is one of only seven countries to allow abortion after 20 weeks, putting us in the company of such countries as North Korea and China. Roberts further indicated the viability rule has no place in the Constitution.

Although far from over, we may very well see the end of Roe in our lifetime, even by June 2022.

To God be the glory!

The arguments for overturning Roe

The attorney finally landed on the “right to abortion,” which, to Justice Thomas’ point, is clearly not in the text of the U.S. Constitution.

Stewart effectively reminded the Court that it had not settled the issue 49 years ago because it is not the Court’s place, saying, “On hard issue after hard issue, the people make this country work. Abortion is a hard issue. It demands the best from all of us, not a judgment by just a few of us. When an issue affects everyone and when the Constitution does not take sides on it, it belongs to the people.”

As Stewart noted, it’s the most unworkable legal standard in American law.

The argument against overturning Roe

Pro-abortion attorneys went beyond the so-called “right to abortion,” or the notion that right is extrapolated from the right to privacy. They argued for autonomy and equity, claiming a woman cannot be equal if she cannot equally be “not pregnant” and “unburdened” by parenthood.

Justice Barrett pointed to safe-haven laws that allow women to delivery newborns to hospitals and other emergency sites without legal ramifications, and therefore alleviating women of the “burden” of motherhood.

The pro-abortion side relied heavily on the argument to uphold nearly 49 years of precedent. But that fell flat when Justice Kavanaugh cited several wrongly decided cases the Court later overturned, including Brown’s correction of Plessy’s “separate but equal” holding during the Civil Rights era.

Liberal justices, Stephen Breyer and Sonia Sotomayor seemed to make prolonged political statements rather than ask questions, with Sotomayor ironically stating overturning Roe would taint the Court as “political.” She later compared a preborn baby’s response to pain to patients on life support by saying, “There’s about 40 percent of dead people who, if you touch their feet, the foot will recoil. There are spontaneous acts by dead brain people. So, I don’t think that a response by a fetus necessarily proves that there’s a sensation of pain or that there’s consciousness.”

Per tradition, the Court will meet today, Friday, December 3, in conference to get the first read on how they will decide the case. There are three primary options:

We won’t know for sure until the ruling comes down.

While one never presumes to know or predict how the Court will rule, the questions and comments all indicate the justices are leaning toward upholding the Mississippi law. Many legal scholars agreed that it would be difficult for the Court to uphold the Mississippi law without also overturning Roe and Casey.

Make no mistake, the fact the U.S. Supreme Court is considering a case that directly challenges Roe and Casey is no less than historic and a very significant step forward to see the day when babies have a secured right to life from the moment of conception.

We are blessed to be witnessing it.

While the legal battle raged inside the Supreme Court, I was fortunate to be among over a thousand pro-life advocates rallying outside. We outshined pro-abortion activists in number, message, and tone.

Some snap shots of my experience at the Supreme Court: 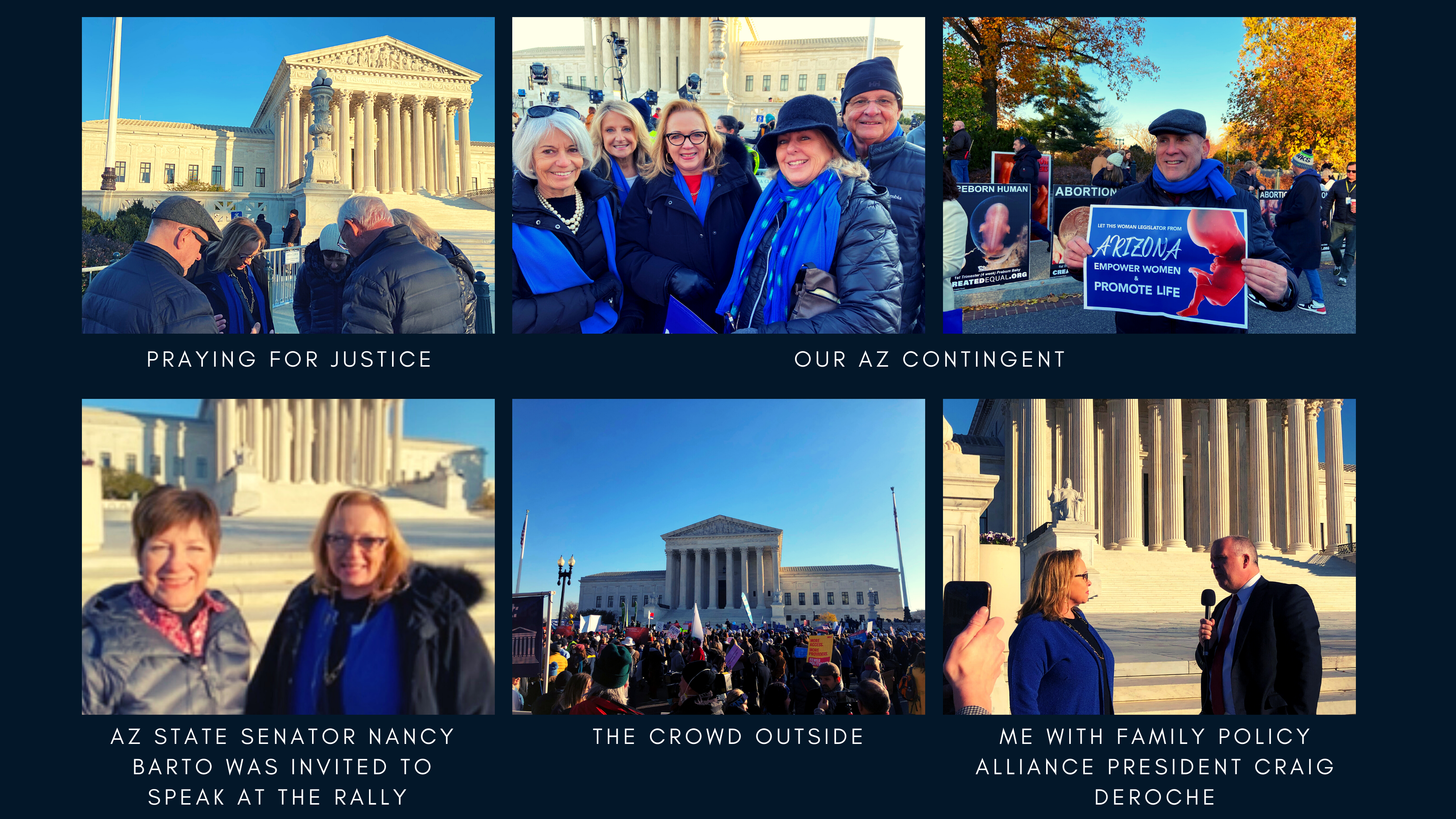 Whether in the Dobbs ruling or later, when Roe falls, there will still be a lot of work ahead of us. Our partners at Family Policy Alliance began a new campaign Wednesday looking ahead to “After Roe.” Visit their website here and click on Arizona on the map to read about our pre-Roe law banning nearly all abortions.

But that doesn’t mean it’s over. The abortion industry will not go away quietly. There will be lawsuits and a continued battle to hold onto the state law protecting the preborn and their mothers from the harms of abortion. More on that when the time comes.

Meantime, a lot can change between December 1st and June 30th. Ryan T. Anderson, President of Ethics and Public Policy Center made this point: “Oral arguments were encouraging, but between now and the announced decision, lots of lobbying of the justices will take place. Message needs to be clear: nothing less than full overruling of Roe and Casey is acceptable.”

It’s true. Although the Supreme Court was meant to be a-political, we know otherwise.

There will be numerous attempts to influence the justices’ opinions. We will follow that closely.

I encourage you to listen to my conversation with Arizona State Senator Nancy Barto here. We recorded it shortly after the oral arguments and “Empower Women Protect Life” rally.

On a lighter note: Take a look at CAP’s new website here