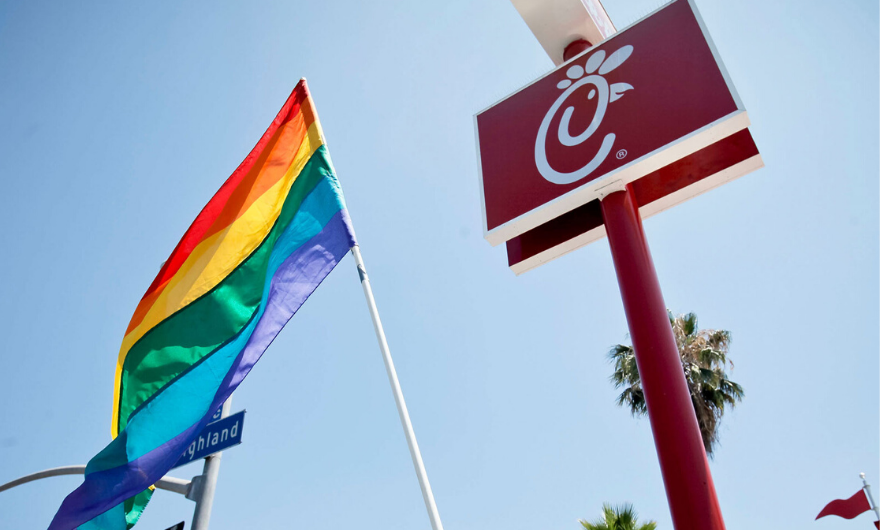 “Our culture has accepted two huge lies. The first is that if you disagree with someone’s lifestyle, you must fear or hate them. The second is that to love someone means you agree with everything they believe or do. Both are nonsense. You don’t have to compromise convictions to be compassionate.”

Many of us responded with sadness and even anger this week when Chick-fil-A announced they would cease funding the Salvation Army and the Fellowship of Christian Athletes. Rather than keep reading tweets and Facebook posts, I decided to try to understand the facts of the announcement.

First, the facts from the Chick-fil-A statement:

“The Chick-fil-A Foundation is introducing a more focused giving approach . . . [it will] deepen its giving to a smaller number of organizations working exclusively in the areas of education, homelessness and hunger.”

The statement revealed that for 2020, $9 million has been committed to Junior Achievement USA and Covenant House International. For each new store opening, the foundation will donate $25,000 to a local food bank. The foundation no longer will make multiyear commitments, but noted its partners could include faith-based and non-faith-based charities.

The statement and direction only applies to the Foundation. Local franchise owners are independent and remain able to support the charities and groups they choose.

As reported by Bisnow, the new charitable giving plan does not include donations to the Salvation Army and the Fellowship of Christian Athletes. The Foundation recently completed a multi-year giving commitment to those two faith-based organizations. Chick-fil-A’s President Tim Tassopoulos stated that this “provides more focus and more clarity . . . [education, hunger and homelessness] are critical issues in communities where we do business in the U.S.”

In response, the Salvation Army issued a statement:

“We’re saddened to learn that a corporate partner has felt it necessary to divert funding to other hunger, education and homelessness organizations — areas in which The Salvation Army, as the largest social services provider in the world, is already fully committed. We serve more than 23 million individuals a year, including those in the LGBTQ+ community. In fact, we believe we are the largest provider of poverty relief to the LGBTQ+ population. When misinformation is perpetuated without fact, our ability to serve those in need, regardless of sexual orientation, gender identity, religion or any other factor, is at risk. We urge the public to seek the truth before rushing to ill-informed judgment and greatly appreciate those partners and donors who ensure that anyone who needs our help feels safe and comfortable to come through our doors.”

Both Covenant House and Salvation Army meet the Foundation’s goal to address hunger needs and serve the homeless. The difference? Salvation Army is Christian-based with the timeless view of marriage as only the union of one man and one woman. Covenant House supports the LGBT ideology and has been applauded by the LGBT community.

In the November 19, Breakpoint, John Stonestreet of the Colson Center commented:

“In fact, Chick-Fil-A stopped giving to so-called ‘culture war’ organizations a long time ago. Monday’s breathless headlines were referring to groups like the Salvation Army and the Fellowship of Christian Athletes, who are called anti-gay not because they advocate for historic and orthodox Christian views on sex and marriage, but because they merely hold them.”

“I find Chick-Fil-A’s decision sad on at least two levels. First, their growth to being the third largest fast food chain on the planet has clearly shown that you don’t have to cave to the pressure in order to survive and grow as a company . . . this decision will be the one that hurts their bottom line. Millions of Americans rallied around the restaurant in 2012 when LGBT advocates called for a boycott, and again in more recent years when cities like San Antonio banned the restaurant from their airports. This decision not only will lose them the support they’ve had, it will embolden the bullies and make it hard for other companies not to likewise cave to the pressure.

Even more sad, however, is that without ever mentioning their names, the Chick-Fil-A Foundation’s decision will only reinforce the slander that the organizations they are no longer giving to are, in fact, anti-LGBT. It will only reinforce that all the good these organizations do is immediately made invalid, if they are Christian groups with historic and biblical Christian convictions. By refusing to offer any clarity on the reasoning behind their decision, Chick-Fil-A allowed the headlines to be re-written in a way that furthers the goals of the LGBT bullies, that ultimately there is only one acceptable position on these controversial issues: full-support and full affirmation.”

My conclusion: Chick-fil-A clearly has moved away from standing in defense of biblical marriage. The attacks from the left, and in particularly the LGBT community, have made a difference. The Foundation grants will no longer be going to faith-based organizations that hold the biblical view of marriage. I’ll hope and pray that the Foundation will return to its roots of standing for biblical marriage. I’ll also hope that local franchises in Arizona will have the freedom to choose to support faith-based ministries.

For now, as one who frequently gets my iced tea at Chick-fil-A, I’ll go elsewhere. I’ll also make sure to drop some dollars in those red kettles from the Salvation Army this Christmas season (assuming they will be there).