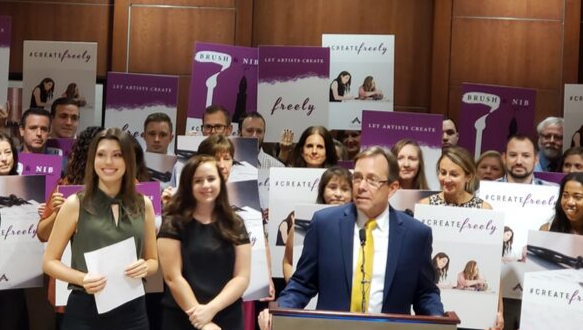 The state’s high court confirmed artists do not give up their free speech and religious freedom rights when they enter the marketplace. Artistic freedom is not restricted only to those who hold the government’s favored viewpoints. The court made clear the government “must not be allowed to force persons to express a message contrary to their deepest convictions.”  It adds, “public accommodations are not immune to the First Amendment.”

Our friends and allies at Alliance Defending Freedom filed the lawsuit and exposed the coercive Phoenix ordinance that mandated artists violate their faith or face fines and jail time.

Now, Our CAP Team will thoroughly analyze the ruling to determine whether changes are needed to Arizona state laws to ensure compliance with today’s ruling.

In their Phoenix business, Brush & Nib Studio, Joanna Duka and Breanna Koski use their artistic talents to create custom hand-drawn invitations for weddings. They happily serve all customers, but, as Christians with biblical views of marriage, they could not violate their faith by creating custom art that celebrates same-sex weddings. The state high court effectively agreed that disagreement is not discrimination stating, “The fact that Plaintiffs’ message based refusal primarily impacts customers with certain sexual orientations does not deprive Plaintiffs of First Amendment protection.”

When they found out a city ordinance compelled them to create custom art for same-sex weddings, even if it violated their deeply held religious beliefs, they had no choice but to file a lawsuit against the city of Phoenix.

Artists should not have to choose between their livelihood and their faith. The Arizona Supreme Court effectively agreed today that disagreement is not discrimination.

Today’s legal victory is one significant step forward in ensuring free speech and religious freedom for all Arizonans. But more work remains to be done. Your generous gift today will help CAP’s efforts to ensure our state laws and local ordinances comply with today’s decision.