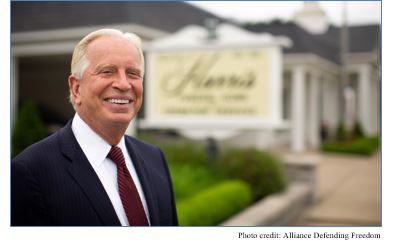 Center for Arizona Policy (CAP) recently filed an amicus brief in support of Free Speech with the U.S. Supreme Court.

In Harris Funeral Homes v. Equal Employment Opportunity Commission (EEOC), Thomas Rost— the owner of Harris Funeral Homes— is being forced by the EEOC to allow a biologically male employee to wear a female uniform while interacting with the public. Rost had dismissed the employee after he would not comply with the funeral home’s sex-specific dress code.

The issue in the case is whether Title VII’s prohibition against sex discrimination prohibits discrimination against transgender people. The case should rest on whether the word “sex” in Title VII of the 1964 Civil Rights Act includes “gender identity.” If “words must be given the meaning they had when the text was adopted”— as Justice Scalia argues in Reading Law— then it should be obvious that Congress did not mean “gender identity” when it used the word “sex” in 1964.

Nevertheless, the Sixth Circuit Court of Appeals judicially amended the law to include “gender identity” and ruled against Harris Funeral Homes. The Supreme Court now has the opportunity to correct this instance of judicial activism.

CAP worked with Aaron Martin from Martin Law & Mediation to file the brief in support of Thomas Rost. The brief focuses on the problem of compelled speech and “preferred pronouns.” More specifically, we argue reading “gender identity” into the word “sex” in Title VII “poses a fundamental threat to people’s ability to speak freely—or the decision not to say something they believe to be untrue— about the issues of sex and gender.”

We provide examples of doctors, teachers, professors, and others being harassed, demoted, disciplined, or even fired for declining to use a person’s “preferred pronoun.” (Alliance Defending Freedom cites our amicus brief with these examples in its brief).

These “preferred” pronouns involve “a radical application of existing gender specific pronouns, but also the substitution of plural pronouns for singular ones and the use of newly invented gender-neutral pronouns, like zie, tey, vis, eirs, and verself.”

Being forced to use specific pronouns under threat of government punishment is never just about words:

The use of particular pronouns expresses a reality underlying those words. Words are never “mere words.” . . . .  Advocates of transgender ideology are free to reimagine human sexuality and gender, and create a language that will communicate their view of reality. But they are not free to impose their novel view of what it means to be human on the rest of society and use the government to punish those who are unwilling to adopt their language or viewpoint.

1. The First Amendment protects individuals’ right not to speak contrary to their beliefs.
a. Forcing individuals to use specific “preferred” pronouns compels speech.
b. Forcing expression of a particular viewpoint inhibits public debate.
c. Compelling grammatical usage and coercing speech will harm our society.

2. Forcing individuals to speak certain words and use someone’s preferred pronouns will invite a host of lawsuits from all sides of the gender debate.
a. Employers will face an unmanageable challenge of balancing rights to avoid lawsuits.
b. Although “[t]he classroom is peculiarly the ‘marketplace of ideas,’” educators have been punished for refusing to use preferred pronouns.
c. Medical professionals will be forced to profess views about sex contrary to their medical training and judgment.

To read CAP’s brief in its entirety, click here. Oral argument on the case before the Supreme Court will be on October 8, 2019.