Arizona is number one! For the second year in a row the nation’s top pro-life legal organization has ranked Arizona the #1 pro-life state. Today, Americans United for Life (AUL) released its 14th annual “Life List,” putting Arizona at the top due to our state’s commitment to provide women and their children the most legal protections.

“We couldn’t have done it without the support of our CAP friends,” Center for Arizona Policy President, Cathi Herrod credits active supporters, Arizona citizens for electing pro-life lawmakers, and the lawmakers themselves for their bravery in crafting policy that truly protects and provides for women and their preborn babies, “It is not always easy to do the right thing when pro-abortion activists misrepresent their intentions. So, I applaud the courage of Arizona’s pro-life lawmakers to vote for pro-life laws, Governor Ducey for signing pro-life laws, and Attorney General Brnovich for defending pro-life laws in court.”

This is the second consecutive year AUL ranked Arizona at the top. 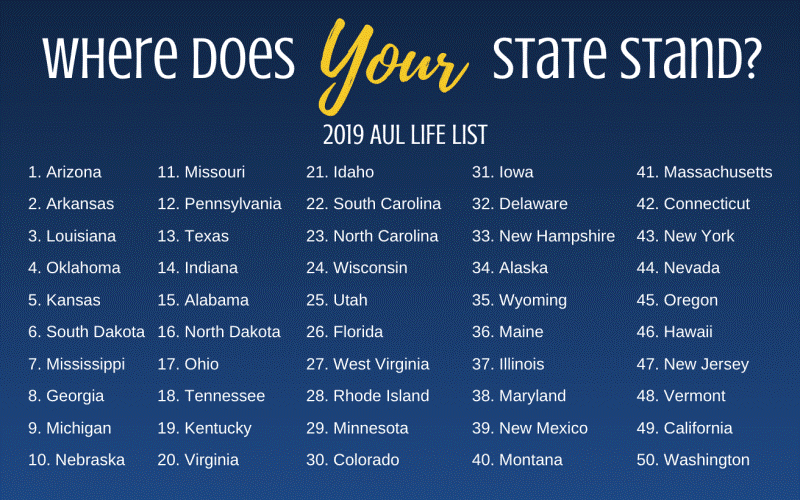 “It’s clear Arizona values women and their preborn children,” Herrod says, “Arizona is committed to providing the best care for mothers and the preborn children they carry. That is why legislators passed the abortion reporting law last year. Reporting statutes will provide critical information and data for policymakers as they seek to improve women’s health and wellbeing. Perhaps even more importantly, it will help identify victims of domestic violence, sex trafficking, and incest. These vulnerable women deserve the protection this law provides.”

Arizona is followed by Arkansas, Louisiana, Oklahoma, and Kansas in the top five.

Thanks, again, to our CAP friends who continue to make these victories possible.

AUL released the “Life List” and its latest version of its flagship publication, Defending Life, known as “America’s Playbook for Life” just over a week before the annual March for Life at the nation’s capitol. Follow Cathi Herrod live from the march on Twitter and Facebook.