Today we honor and respect champions of freedom who dedicated their lives to protecting and defending the freedoms that you and I enjoy every single day.

Today, December 7 is Pearl Harbor Remembrance Day, the date which lives in infamy. More than 2,400 Americans gave their lives that Sunday morning.

A 17-year old man, George Herbert Walker Bush, tried to enlist a day later. Too young to enlist at 17, he had to wait until he was 18.

In 1991, marking the 50th anniversary of Pearl Harbor, that same young man, now President of the United States of America, George H.W. Bush gave a stirring speech painting the picture of what happened that day in honor of those who gave their lives. Click on the image below to watch his speech: 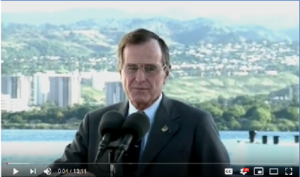 His speech included these words:

“The men of Pearl Harbor . . . knew the things worth living for were also worth dying for: principle, decency, fidelity, honor.”

“. . . always remember those who gave their lives to keep us free.”

Those words resonate today as do the many words uttered this week in honor of President George H.W. Bush. Seeing the pictures of a grieving family remind us of the importance and value of family, of honoring our mothers and fathers. Hearing the eulogies given by President George W. Bush and Jon Meacham remind us of the importance of public service, of living for ideals greater than oneself.

We saw the picture of what civility in public life once was and could be again.

“Much this week speaks to the God-created goodness of our humanity: the nobility of service, the fundamental strength of family, the beauty of marital fidelity, and character revealed only in crisis. Thanks be to God for common graces that point to transcendent truths.”

As for us at Center for Arizona Policy, these reminders strengthen and inspire us to do more than ever to champion freedom and see its triumph not die on our watch.

As we wrap up 2018 and look ahead to 2019, would you consider making a year-end contribution to Center for Arizona Policy? It is critical that we close out the year on a solid financial footing in order that we may continue to Champion Freedom Together in the New Year! It takes two minutes and makes a big impact! Click here and make your tax-deductible gift. Thank you!