A recent “Fact Check” by the Arizona Republic reported as “mostly true” that Arizona is the most pro-life state in the country. Okay, the paper said most “anti-abortion,” but I prefer to use the term “pro-life.”

Over the last 10 years, pro-life laws in Arizona have led to abortion rates trending down. The recently released 2017 Abortion Report by the Arizona Department of Health Services (DHS) reminds us all that moving forward as a state that protects human life from its very beginning and provides for mother’s health and safety depends on what happens in next Tuesday’s General Election. 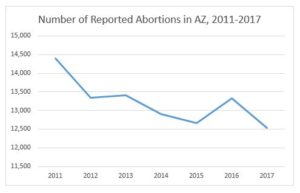 Most significantly, the abortion rate in 2017 was 9.2 abortions per 1,000 women aged 15 – 44 years, the lowest it has been since new abortion reporting laws took effect in 2011. The below graph from the 2017 Abortion Report from DHS shows this downward trend: 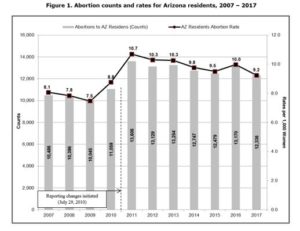 According to the latest data from the CDC, the U.S. abortion rate in 2014 was 12.1. This places Arizona’s abortion rate of 9.2 far below the national average. Make no mistake, however, the abortion numbers still are too high. More needs to be done to meet the needs of women considering an abortion so that both lives are spared the tragedy of abortion.

Other interesting statistics in the report include:

Once again, we see the cultural necessity of restoring the value of marriage as the best family structure for men, women, and children. Nearly 60% abortions were in the 20 to 29 year-age group.

Regrettably, the Ninth Circuit Court of Appeals overturned the Arizona law– protecting mother’s health and safety as well as preborn children– that prohibited abortions after 20 weeks.

The monthly numbers show the value of data. Pro-life efforts to reach women considering an abortion need to be focused in the months showing the highest number of abortions, starting with March. Most likely, these abortions result from conceptions over the Christmas, New Year’s, and Valentine’s Day holidays.

Due to the CAP-supported law passing this year to update and enhance our abortion reporting requirements, the state will begin reporting more complete and useful data next year. It will include for example, information on the state’s informed consent process, reasons for the abortion, the types of facilities and doctors involved in abortion, and more detailed information on abortion complications.

Your partnership with CAP matters.

Our commitment remains the same: to love and care for both women and preborn children.