Spending 30 hours in Washington D.C. to support Judge Brett Kavanaugh’s nomination to the U.S. Supreme Court only deepened my concern for our nation. The inability to engage in civil discourse has disintegrated even further than I could have imagined.

Opponents to Judge Kavanaugh’s nomination appear to hold the position that any woman that alleges sexual abuse against another individual is always to be believed. Hundreds of “believe women” activists crowded into the atrium of the Hart Senate Office Building and outside.

That’s simply not how our system of government works. Our country is built upon due process and a presumption of innocence until proven guilty.

Stop and think about this. Any woman, could accuse any man of an assault of this nature. Should she be believed simply because she says she was a victim? Surely as a people we don’t want to set that precedent.

To those who would say – “well Cathi –you believed Judge Kavanaugh when he said he was innocent.” There is a vast difference. Even before the hearing, it was clear that not one alleged witness or party named by Dr. Ford agreed with her recall of the facts about Judge Kavanaugh. Several people were interviewed by the committee, giving sworn testimony under penalty of perjury.

Judge Kavanaugh himself gave sworn testimony under penalty of perjury.

For Dr. Ford’s testimony, Republican senators sat back attentively to allow their hired counsel (Rachel Mitchell, an experienced sex crimes prosecutor from the Maricopa County Attorney’s Office) to question Dr. Ford like any sex crimes prosecutor would. Following the hearing, Ms. Mitchell reportedly told senators that Dr. Ford’s testimony did not provide sufficient evidence with which she would have recommended prosecution.

Ms. Mitchell only could raise questions in five-minute increments. That hardly seemed adequate to be able to string together a series of questions to elicit an accurate picture of what did or didn’t happen. In contrast, Democrat senators used their five-minute increments to back-up everything Dr. Ford said, often making more of a statement in support as opposed to attempts to elicit the truth.

At least for the time I was in the hearing room, I will say that all 21 senators listened attentively to Dr. Ford.

Dr. Ford may well have experienced the trauma of sexual assault as she vividly described at the hearing. I do not question that she experienced a horrific assault. However, Dr. Ford’s testimony still did not provide any corroboration of the facts.

I, for one, cannot conclude that Dr. Ford’s perpetrator was Judge Kavanaugh.

Judge Kavanaugh’s opening statement unequivocally declared his innocence. The Judge strongly put forth a record of how the allegations were not factual.

Yes, Judge Kavanaugh showed anger and lashed out at times. I don’t know a man falsely accused of such a horrible crime who would not have responded in the same manner. The Judge defended his honor and his family’s honor.

I continue to stand by what I stated at the “Women for Kavanaugh” rally (starting at 22:30): 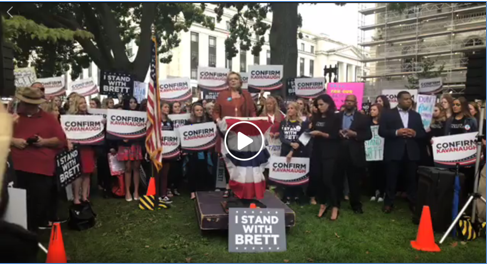 Thankfully, Arizona Senator Jeff  Flake announced this morning he would vote to confirm Judge  Kavanaugh. The Senate Judiciary Committee will report out Judge Kavanaugh’s nomination favorably today. Then the full Senate will begin consideration of his nomination immediately. The debate will take at least 30 hours with the Senate remaining in session over the weekend.

God willing, by next Tuesday, Judge Kavanaugh will be Justice Kavanaugh and sitting on the U.S. Supreme Court.