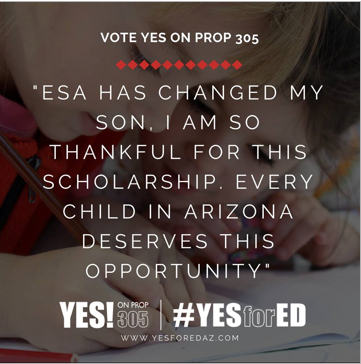 Center for Arizona Policy (CAP) would urge you to vote “YES” on Prop 305 in the upcoming General Election.

Why? Because every family deserves the opportunity to choose the best educational setting for their child.

CAP supports a parent’s right to choose from a wide variety of school options, including district, charter, online, private, or homeschool. Parents are in the best position to make these choices, as they are most familiar with the educational needs, personalities, learning styles, and interests of their children.

When it comes to education, one size doesn’t fit all.

That is why CAP supports the expansion of the Empowerment Scholarship Account (ESA) program— it gives more families more options. Click here for stories from families that have benefited from the ESA program.

What is the ESA Program?

The ESA program allows parents to withdraw their children from district or charter school and receive ninety percent of state funds allocated for their child for a variety of educational expenses, including therapy, tutors, textbooks, curriculum, tuition at private schools, and even fees for standardized tests.

As originally passed in 2011, the ESA program was only available to students with disabilities. Since then, Arizona has expanded those qualified for the program, and it now includes:

In 2017, the ESA program was further expanded to include all district and charter school students by phasing in eligibility over four years with the number of students capped at approximately 30,000 (around 3% of all public school students). To read the bill that expanded eligibility, click here.

However, opponents to the expansion gathered enough signatures to refer the law to the 2018 General Election as Prop 305. A “yes” vote will be in favor of enacting the 2017 law expanding eligibility, while a “no” vote will repeal the law.

For analysis and summary of Prop 305 from Legislative Council, click here.

For ballot arguments in favor of Prop 305, click here.

Anti-school choice advocacy groups have already made known that their legislative agenda for 2019 includes repealing the entire ESA program and Arizona’s scholarship tax credit program (STOs). Obviously, whether this can happen depends on the outcome of the upcoming election in November.

Regardless of how the election turns out, if Prop 305 is defeated— especially if it is by a large margin— school choice opponents will gain momentum, and will try to convince legislators that Arizonans no longer want school choice.

Even if they find that complete elimination of school choice programs is not feasible, anti-school choice groups will nonetheless strive to cut them back if they sense school choice support is waning.