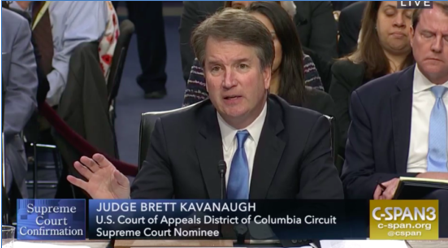 Today is the fourth and last day of Judge Brett Kavanaugh’s confirmation hearings before the Senate judiciary committee. Judge Kavanaugh has demonstrated by his weighed responses and his judicial record that he is a pro-law judge.

Judge Kavanaugh’s impeccable credentials and over twelve years of experience as a judge on the U.S. Court of Appeals for the District of Columbia Circuit make clear that he is more than fit to serve as a justice on the U.S. Supreme Court.

Unfortunately, because of the theatrics inside and outside the hearing room, this solemn occasion has been turned into “an overblown, politicized circus”– to use Senator Ben Sasse’s words.

Amid yelling from protestors in the hearing room — over 70 people were removed from the room on the first day alone for purposefully disrupting the proceedings — and at times very contentious questioning from members of the judiciary committee, Judge Kavanaugh has remained poised and has skillfully responded to questions meant to disqualify him from the office.

We Can Do Better

“Our political commentary talks about the Supreme Court like they are people wearing red and blue jerseys. That’s a really dangerous thing and, by the way, if they have red and blue jerseys, I would welcome my colleagues to introduce legislation that ends lifetime tenure for the judiciary. Because if they’re just politicians, then the people should have power and they shouldn’t have lifetime appointments.

So, until you introduce that legislation. I don’t believe you really want the Supreme Court to be a politicized body. Though that’s the way we constantly talk about it now.

We can and we should do better than this. It’s predictable now that every confirmation hearing is going to be an overblown, politicized circus. And it’s because we’ve accepted a bad new theory about how our three branches of government should work — and in particular about how the Judiciary should work.”

To view his full opening speech—where he eloquently explains the proper role of the Judiciary and the other two branches of government— click on the image below. For a transcript of his speech, click here. 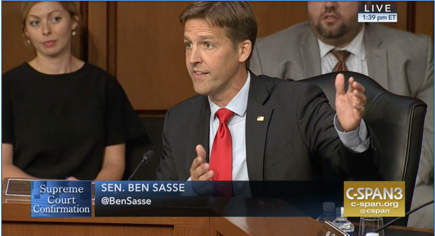