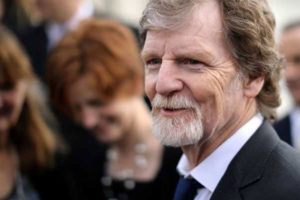 “The state of Colorado is ignoring the message of the U.S. Supreme Court by continuing to single out Jack for punishment and to exhibit hostility toward his religious beliefs,” said ADF Senior Vice President of U.S. Legal Division Kristen Waggoner.

On June 4th of this year, Jack Phillips won his case before the U.S. Supreme Court. The Court ruled that the Colorado Civil Rights Commission (CCRC) showed unconstitutional anti-religious hostility against Jack when he declined to design a wedding cake to celebrate a same-sex marriage.

Blatantly ignoring the Court’s ruling, the CCRC is once again going after Jack. The state is doubling down on its hostility by alleging that Jack discriminated against a transgender person in 2017.

In June of 2017, right when the Supreme Court initially announced that it was going to hear Jack’s case, a local attorney and LGBT advocate contacted Jack’s shop requesting a cake with a pink and blue design celebrating that attorney’s transition from male to female. Jack declined because it would have expressed a message about human sexuality that violates his religious beliefs. This request was most likely a set up because the same attorney appears to have contacted Jack at least two more times after that, requesting cakes celebrating Satan’s birthday and depicting drug use.

Soon after Jack declined to design the gender-transition cake, the attorney filed a complaint against him with the CCRC, alleging discrimination based on gender identity. The complaint was on hold pending Jack’s case at the Supreme Court.

Despite a 7-2 ruling against the state and a reprimand from the Supreme Court for its hostility toward Jack’s religious beliefs, the CCRC recently made a probable cause determination that Jack had unlawfully discriminated against the attorney by declining to make the gender-transition cake.

The CCRC continues to ignore the fact that Jack serves all people— individuals of all races, faiths, sexual orientations, and gender identities— and will create custom cakes for anyone.

What Jack has indicated he is unable to do is design cakes that express messages or celebrate events that violate his sincerely held religious beliefs. He has declined to design Halloween cakes, sexuality explicit cakes, cakes celebrating alcohol and drug use, and cakes with disparaging messages, including those targeting the LGBT community.

However, this time, instead of being on the defensive, Jack Phillips, with the help from Alliance Defending Freedom, has filed a federal lawsuit against the state of Colorado for unjustly targeting him for his religious beliefs.

In his lawsuit, Jack notes that for nearly six years Masterpiece was litigated, he “endured multiple death threats, repeated harassment, and countless hateful phone calls and emails as a result of Colorado’s intolerance toward him.” The harassment, hateful communications, and death threats got so bad that his wife was afraid to set foot in the shop. He has had rocks thrown through the window of his shop, and has been “forced to install security cameras at Masterpiece Cakeshop to protect himself, his family, his employees, and his customers.” In addition to all this, he lost 40% of his business and had to lay off the majority of his employees because he could no longer design and sell wedding cakes.

Colorado’s renewed efforts to crush Jack for his religious beliefs will bring a new wave of harassment, hateful phone calls, and death threats. Enough is enough. The federal court should put an immediate stop to the state’s continued harassment of Jack.

For more information and commentary on the case, see: