Honoring Those Who Defend Freedom

Freedom is never more than one generation away from extinction. We didn’t pass it to our children in the bloodstream. It must be fought for, protected, and handed on for them to do the same, or one day we will spend our sunset years telling our children and our children’s children what it was once like in the United States where men were free.

A quick note: Today we are sharing one of our favorite 5 Minutes for Families posts from 2017. It features Center for Arizona Policy (CAP) ministry friend, Frank Palamara. We hope you enjoy this reprise on this very special Memorial Day:

This Memorial Day weekend, may we honor and show our gratitude to those who defend our freedom. May we not lose heart but may we take courage from thinking of those who have gone before us to defend that freedom. May we honor that legacy by fighting for and protecting our cherished freedoms.

Once again, I want to share with you an email I received from a dear CAP friend. In it, the WWII veteran recalls a recent “Honor Flight” he took and the overwhelming sense of patriotism he experienced. 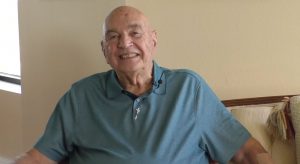 “It was a trip that I will never forget. There were 27 WWII veterans aboard, many in wheel chairs and all with an assigned guardian. The average age of the group was 93.

Every veteran was in the service of either the Army, the Navy, the Air Force, or the Marines during WWII. One of the Navy vets was part of the honor guard aboard the battleship Missouri on the day in 1945 when the Japanese surrendered.

Another was an MD who brought his original red cross flag with a red cross on a white background that he used on his jeep, tending to the wounded on the battlefields of Europe. He was 96 years of age.

My hotel roommate was a Navy CB who constructed the airfields on the captured Pacific Islands while the Japanese army was still there shooting at them. He was 91 years old.

Everywhere we went we were greeted with special attention, cheers and respect. In the airport we were given priority pre-clearance by the TSA, boarding with no inspection. The TSA was super respectful of all the vets.

On Thursday, Nov 5, we were bused to D.C. where we were taken to the following memorials:

On Friday, Nov 6, after breakfast and hotel check out, we were bused to Fort McHenry where we saw a movie and heard the history of the creation of the Star Spangled Banner by Francis Scott Key. It was in 1814 that Fort McHenry was bombed by the British fleet and attacked by the British army. The British were defeated by the U.S. forces with civilian help. Francis Scott Key witnessed the attack and later wrote the song that became our National Anthem.

When we arrived in Phoenix that evening, there were hundreds of people in the airport who applauded the veterans continuously as we were exiting the plane and proceeding to the airport baggage area. There was an Honor Guard carrying our flag, escorted by soldiers carrying firearms. The Star Spangled Banner was sung. God Bless America was sung. The crowds were huge.

Before our arrival, my wife told me that the entire arrival area was crowded with family, friends, and bystanders who were celebrating even before we arrived. They were guided by another honor guard with many flags who formed a circle with the crowd in the arrival area, sang the songs of the Armed Forces and even said a prayer in commemoration of the WWII veterans who would soon be arriving.

This experience will live with me for the remainder of my life.”

We can advocate for life, marriage and family, and religious freedom only because of those who have fought for our right to do so. For that, we are forever grateful.

We owe it to all veterans to hold tightly to the precious freedoms we enjoy and to preserve them for our children and grandchildren.

May you have a blessed Memorial Day weekend.