Center for Arizona Policy does not support HB 2586. Following are some of our reasons:

These types of laws are solutions in search of a problem. The citizens of Arizona, like most Americans, do not refuse to hire, serve, or rent to people simply because they identify as gay or lesbian or because of their gender identity. This is not only because the people of Arizona are tolerant and fair-minded, but also because the free market, through boycotts and public pressure, would swiftly impose substantial social costs on anyone engaged in baseless discrimination.

Advocates of SOGI laws like HB 2586 argue that they are needed because they are good for business. However, in Arizona, we see repeated announcements of new businesses moving to Arizona because of our favorable business climate. The lack of a statewide law is not impeding growth. Further, the chart below showing the business outlook and economic growth of states that do not have such laws for 2017 prove that they are not needed for economic growth. 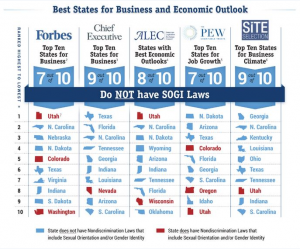 Every person should be free to live and work according to his or her convictions. However, SOGI laws have imperiled First Amendment freedoms by requiring citizens to act contrary to their religious beliefs or convictions regarding marriage and human sexuality. If those citizens choose to act consistently with their conscience, the government subjects them to fines, penalties, and, in some jurisdictions, jail time.

Small-business owners that serve all people, yet cannot celebrate all events or communicate all messages, have been harmed by SOGI laws:

These laws threaten small-business owners with devastating financial liability for actions based not on objective traits, but on subjective and unverifiable identities. The concept of gender identity, in particular, is so fluid and ill-defined that even its proponents admit that it may vary by time and place for a particular person. Due to their vague language, broad reach, and inclusion of unverifiable traits, these laws may be used to punish small-business owners even when they do not intend, or even know, that they are acting in violation of the law—indeed, even if they are trying to prevent men who identify as women from entering women’s bathrooms.

These laws require that sex-specific facilities, like bathrooms and locker rooms, must admit individuals in accordance with their chosen gender identity. This means that men who profess a female identity must be permitted to access women’s bathrooms and locker rooms. A women’s shelter for victims of domestic violence could be forced to provide shelter for a man alleging a female identity. This clearly raises privacy and safety concerns. Studies have shown that sexual predators will take advantage of laws that grant them easier access to their victims.

Some proponents allege that policy proposals like HB 2586 provide exceptions for religious institutions. However, these laws have been used to compel faith-based institutions to choose between providing necessary services or following state mandates. In Boston, Catholic Charities ceased its adoptions services rather than follow the law’s mandate to place children in same-sex households.