This past Wednesday with a 5-2 vote, the Senate Health & Human Services Committee passed SB 1393, a bill introduced by committee chair Sen. Nancy Barto and supported by Center for Arizona Policy (CAP). This bill ensures that in a divorce proceeding the spouse that wants disputed in vitro embryos for the purpose of having children is awarded the embryos.

The need for this law arose from a recent tragic court ruling in Maricopa County:

In 2014, before undergoing treatment for cancer, Ruby Torres and her fiancée agreed to complete in vitro fertilization so that they could have children in the future. They created seven frozen embryos. Ruby underwent cancer treatment, and her cancer went into remission. However, their marriage ended in a divorce, leaving a Maricopa County Superior Court judge to decide how to award their embryos. Ruby wanted the embryos because they were likely her only chance to have biological children. Her husband did not want Ruby to be awarded the embryos because he was concerned with future financial obligations.

The Superior Court judge noted that Arizona law is silent on the matter, and based on language in their contract with the fertility clinic, ordered the embryos to be donated to a fertility bank or another couple. Ruby is appealing the decision to the Arizona Court of Appeals.

SB 1393 ensures that parents in Ruby’s position will be awarded the embryos and will no longer be at risk of losing them to a third party, or leaving them frozen forever.

Ruby had the opportunity to testify in front of the Senate Health committee. To watch her powerful testimony, click on the image below (4:21:25-4:28:49). 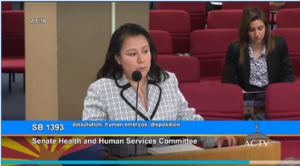 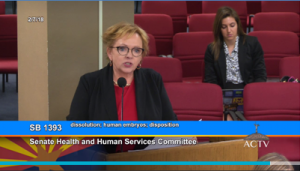 Access CAP’s Fact Sheet on SB 1393 on our bill tracker.