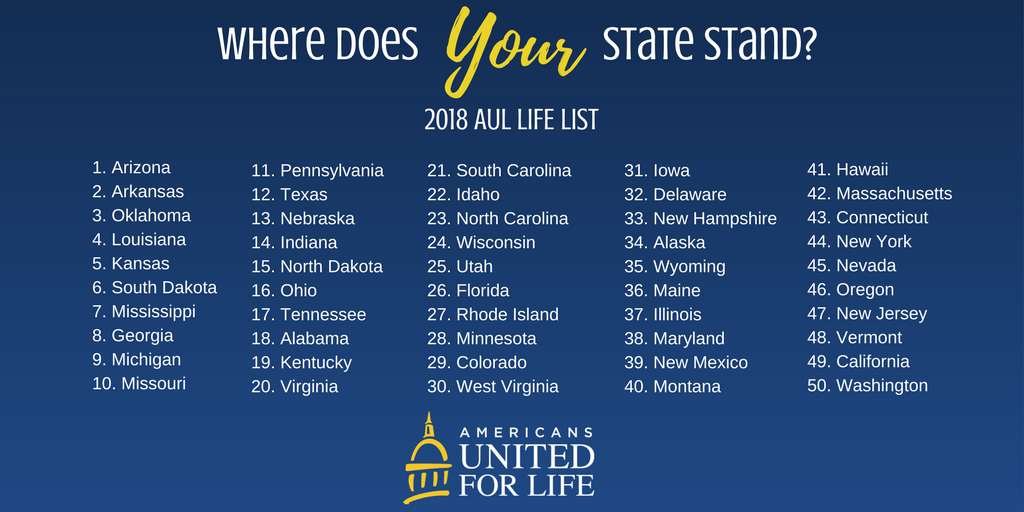 After a “comprehensive analysis of each state’s legal protections for human life from conception to natural death,” AUL’s legal team gave Arizona the highly coveted #1 ranking as the most pro-life state in the country. That is, the state that provides women and their children the most legal protections. Arizona was closely followed by Arkansas, Oklahoma, Louisiana, and Kansas.

In 2017, AUL ranked Arizona as the #5 most protective state and was one of only four states named as AUL All-Stars, but this is the first time Arizona has received a #1 ranking. AUL will release its full report next Monday on the 45th anniversary of the Roe v. Wade decision legalizing abortion nationwide.

According to Steve Aden, AUL’s Chief Legal Officer and General Counsel, “legislators across the country are continuing to fight back against ‘increasingly corporate abortion industry, that is determined to put their profit margins before the health and safety of women and children.’” The Arizona legislature exemplifies this fight in defense of women and their children.

This designation only happens because Arizona citizens elect policymakers who stand for the lives of preborn children and their mothers. On behalf of those citizens, we especially thank those pro-life legislators, former Governor Jan Brewer and current Governor Doug Ducey for keeping their commitments and enacting over 37 pro-life measures since 2009, making Arizona the most pro-life state in the country.

As for our Center for Arizona Policy team, much work remains to be done to fully protect preborn children and their mothers. To help support our work, please consider making a donation.