This week’s look at Prop 205 focuses on what the ballot measure doesn’t do: It doesn’t regulate marijuana like alcohol despite the much-repeated claims of the marijuana marketers.

We have already established that Prop 205 is not about medical marijuana. That is currently legal in Arizona. We also went over how it puts children in harms way, allows for marijuana impaired drivers, and we laid out the sobering facts from Colorado.

Another reason Arizona should reject Prop 205: It does NOT regulate marijuana like alcohol. 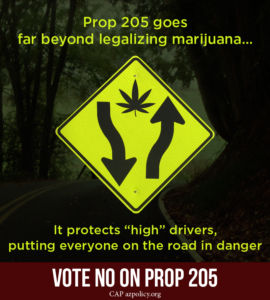