Continuing our dive into the details of Prop 205, I want to draw from the experience of others who have gone before us. Arizona has the benefit of learning from other states that have suffered the consequences of legalizing recreational marijuana.

First, let me reiterate: Prop 205 will do nothing to change the fact that medical marijuana is legal in Arizona. This measure is strictly about recreational use.

Last week we looked at the risks and harm to our children and youth.

The second reason Arizona should defeat Prop 205: Colorado’s marijuana experiment is a failure. 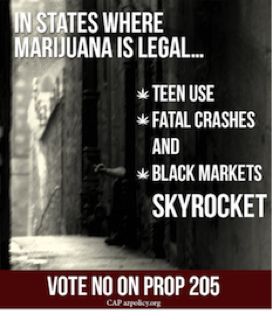 Listen to what this Colorado educator
has experienced since marijuana was legalized in his state.